New research has revealed that households have not taken steps to change their home energy usage, despite the opportunity to save money and cut contributions to global warming.

New research marking the start of Big Energy Saving Week 2020 (20-26 January) has revealed a significant gap in consumer understanding about managing their household energy use and the simple steps that people can take to reduce their carbon footprint.

The survey, conducted by Citizens Advice and Energy Saving Trust, shows that over one-third (36 per cent) of British households have not made changes to their energy usage at home in recent years. That’s 9.7 million households that experts say need more help and encouragement with ways to save money and reduce their household emissions.

Almost three-quarters (73 per cent) of people are surprised to hear how much homes contribute to global warming. British homes are responsible for around 25 per cent of carbon emissions, making them one of the biggest contributors to our greenhouse gas emissions.

Head of consumer advice at Energy Saving Trust, Laura McGadie, says: “Our research shows that while great strides have been made by some households, more can be done, and by more people. If every household in Britain made just a handful of energy saving changes, the combined impact could make a big difference to our finances and the environment.

“We are committed to inspiring everyone to make small changes to their energy saving habits this Big Energy Saving Week 2020 –particularly those who will benefit most from the money they could save.”

The vast majority of households (87 per cent) think small changes will make little or no difference to their finances. One-third of respondents (31 per cent) don’t consider managing their energy use as a priority or think it would cost them something to control it (19 per cent).

The total carbon savings if households took these four simple steps would be the equivalent of taking around 3 million cars off the road.

One-quarter of households say being given hints and tips would motivate them to make energy saving changes. To help, Citizens Advice, Energy Saving Trust and BEIS are launching an expert-approved list of 20 ways to save (2.10MB) as part of Big Energy Saving Week 2020, urging people to take their first step or do more on their energy saving journey. Consumers are also encouraged to contact the Simple Energy Advice Service for information and support. 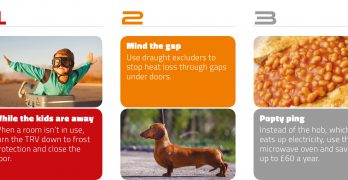 A Bill that gets its second reading in Parliament next month has the potential to rescue plumbers trapped in a pension scheme nightmare. Some people have been told they could face… Read Full Article

The HSE has prosecuted a lapsed gas engineer after he carried out gas work that was found to be Immediately Dangerous. Mansfield Magistrates’ Court heard that, during September and October… Read Full Article