A roofer has been given a suspended prison sentence after his work on a chimney put an elderly woman’s life at risk from CO poisoning.

Truro Crown Court heard that Mark Anthony Reski, trading as MR Roofing & Leadwork, was contracted to remove and rebuild the chimney stack on the roof of a property in Fowey, Cornwall. The chimney stack was shared between two properties, and the property neighbouring the one where Mr Reski was contracted was occupied by a vulnerable elderly woman who had no control over the works.

Mr Reski removed the shared chimney stack in March 2019. But when he removed it, he exposed the flue liner of the gas range in the elderly woman’s property. His work left the flue liner unsupported, dangling at an angle and exposed to the elements.

The flue liner was left in this dangerous state for seven days and was only discovered when a CO alarm sounded in the elderly woman’s home. The court heard that she sought help and the fire service attended. On entering the property, the personal CO alarms carried by the fire fighters were activated.

The fire service shut off the gas and contacted a Gas Safe registered engineer, who found that the flue to the gas range was spilling dangerous levels of carbon monoxide. The gas engineer classified the situation as Immediately Dangerous and reported it to the HSE.

The HSE’s investigation found that Mr Reski had not made any proper or meaningful enquiries into what gas appliances where flued through the chimney.

Mark Reski of Lockengate, Bugle, Cornwall, pleaded guilty to breaching Regulations 8(1) of the Gas Safety (Installation and Use) Regulations 1998 as amended. He was sentenced to six months in prison, suspended for 24 months. He was fined £5,000 and ordered to pay costs of £3,077.60.

Speaking after the hearing, HSE inspector Simon Jones said: “It should have been blindingly obvious to Mr Reski, an experienced roofer, that the chimney that he was working on was flueing a gas appliance when he exposed the flue liner.

“Mr Reski made no enquiries whatsoever as to what was flueing through the chimney and his actions put an elderly and vulnerable woman’s life in serious danger. It is only by good fortune that she heard an alarm sounding and called for help and so did not suffer potentially fatal carbon monoxide poisoning.” 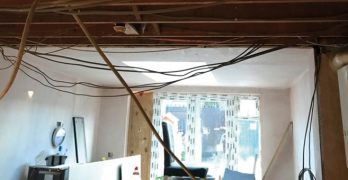 A building company has been fined £16,000 after it removed a domestic boiler flue and left its products of combustion escaping into a new extension. Birmingham Magistrates’ Court heard that MD… Read Full Article