The homes of 50,000 households will be upgraded with green improvements, reducing carbon emissions and supporting thousands of green jobs, says the government.

It has announced £562 million for more than 200 local authorities in England and Scotland to fund an upgrade of their least energy efficient and fuel-poor homes. This will help to transform more than 50,000 low-income households and social housing properties and support 8,000-plus jobs every year, it says.

The schemes will include measures including cavity wall, underfloor and loft insulation, and replacing gas boilers with low-carbon alternatives such as heat pumps where appropriate. It will also include installing solar panels on social housing properties.

UK Business and Energy Secretary Kwasi Kwarteng says: “We are ensuring households across the country enjoy warmer homes that are cheaper to heat and emit fewer emissions, all while creating new work for local plumbers, builders and tradespeople.

“This is an initial downpayment on the UK government’s plan to invest over £9 billion into eradicating fuel poverty, improving the lives and homes of low-income households. This is yet another important step we are taking to eliminate our contribution to climate change and build back greener from the pandemic.”

Housing minister Christopher Pincher MP says: “The challenges involved in improving the energy efficiency of our homes and reducing carbon emissions are substantial. However, the investment … along with our Future Homes Standard, will help ensure that existing and newly built homes will be fit for the future, better for the environment and affordable for households to heat using low-carbon energy.”

The green home projects will help cut over 70,000 tonnes of carbon annually – the equivalent of the total direct and indirect carbon footprint produced by around 9,000 UK households.

The government says this is the latest step in its plan to eradicate fuel poverty, manage energy bills, and reduce carbon emissions from domestic buildings, which will help low-income families and social housing tenants.

An estimated 39 per cent of social housing is believed to be below Energy Performance Certificate C in England.

The government has launched a website that provides homeowners with a home energy MOT, providing recommendations that could help save them hundreds of pounds a year on their bills. The… Read Full Article 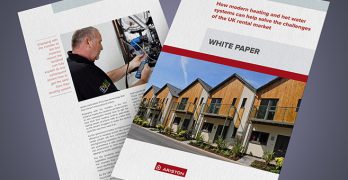 A new White Paper from Ariston aims to show how modern heating systems and technology can help landlords meet some of the challenges facing the UK rental market. The White… Read Full Article